Wherever the notion of paradise exists, so does the idea that it was lost.

The first book in the Darking Hundred series, Coldharbour Gentlemen, is here! 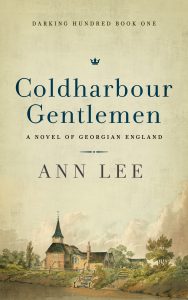 The Darking Hundred series opens with a story based on the true history of smuggling in 1800 in rural Surrey. This lively tale of a boy’s adventures is set against the backdrop of the economic crisis that gripped England after years of war with France and the failed harvests of the 1790s. Here’s how it’s described on the book cover:

Be careful what you wish for.

Summer 1800. England is at war with France but in rural Surrey the conflict seems far away: the people of Darking Hundred are more concerned with the harvest and the price of tea.

Young Harry Steer sits trapped at his desk, cramming with his tutor before being sent away to school. But everything changes when he crosses paths with a band of smugglers sneaking past his house. Soon he’s joined their nighttime forays and finds adventure matching wits with the forces of the law.

At first Harry couldn’t be happier with his secret life, but as the net tightens around his companions he discovers the dark side of their illicit enterprise. His summer hijinks turn deadly serious for himself and everyone he loves. Harry will need all his brains and courage if he hopes to break free and find his way back to all that matters to him—home, family, belonging.

Coldharbour Gentlemen is a gripping tale of peril and heroism sure to touch readers of all ages.

Although the Darking Hundred series begins with a child’s-eye view of the world, it is intended primarily for adult readers who enjoy discovering other times and places. All the stories take place in the year 1800 and within a few miles of the Surrey market town now known as Dorking. Instead of bringing to life the major events and famous people of history, this historical fiction series focuses on ordinary people and how their daily lives were shaped by the tumultuous changes happening at the dawn of the nineteenth century. Each book tells the tale of a different set of characters, combining to paint a composite portrait of life in rural Georgian England.

The cover image was painted by watercolourist John Hassell, who travelled the length and breadth of Darking Hundred in the 1810s and 1820s depicting buildings and scenery. This painting shows the Church of St. Peter in the village of Newdigate and was painted in 1823. The church plays a small part in Harry Steer’s story in Coldharbour Gentlemen: the smugglers have hidden illegal casks of brandy in the bell tower, and they ask our hero to climb into the tower to tie off a rope for letting down the casks so they can be moved on to their next destination.

Look for Coldharbour Gentlemen in paperback or ebook on Amazon.