You are what you eat, and in English rural society in 1800 people knew exactly who you were based on what was on your table. A poor man was known for his bread, and the sort of bread he ate designated his level of poverty. A person of the middling sort had mutton at the centre of his diet; and so on, up the economic scale.

When you ate was also a marker of class. A farm labourer generally began his day with several hours of work before taking a pause to eat bread and cheese. The women and children in his family were lucky to get even that, and they often subsisted mainly on gruel. Servants also worked for hours before eating, though they were likely to eat whatever was left from their masters’ breakfasts. Often the bread of the poor was made not from fine wheat flour but from barley or rye. It was easy for dishonest bakers to adulterate darker flours, so these loaves were viewed with suspicion. Being able to afford fuel for a fire was a barrier to breadmaking, as it was for meals in general, so a poor woman might prepare her dough at home and take it to a bakery for cooking. Many farmworkers had only one hot meal a week.

A labourer would eat a second time late in the day—more bread; potatoes and vegetables if his family was able to keep a garden; fruits and nuts collected from the common lands and hedgerows; and occasionally eggs and a bit of meat if they were able to keep livestock or were skilled at poaching. Pigs were prized because they required little space, and could be sent out into the woods in fall to fatten on acorns and beechmast. Those fortunate enough to have a few pigs would salt or pickle or smoke every part of an animal they slaughtered and eat it over the course of months, nose to tail. Begging at the kitchen doors of the gentry was an option for the unemployed, and regales—celebratory meals centred on large quantities of meat, offered by landlords after a harvest—were important highlights of a poor family’s year.

Farmers like the Steers of Coldharbour Gentlemen, who had enough land and labour to be financially secure, were starting to imitate the lifeways of the gentry in their eating habits. They would rise to a breakfast of bread-and-butter, plus some form of protein ranging from cheese to preserved pork. Mutton, potatoes, and vegetables were the standard fare for dinner, served at two or three in the afternoon. Their means allowed them to buy sugar and currants and to have a plentiful supply of eggs, so they often enjoyed some form of pudding.

Beef would be a rare luxury for a yeoman farmer: cattle were more valuable alive than slaughtered, and beef was harder to keep fresh so an animal would only be killed when there were many mouths to feed. (In towns it was a different story: beef was generally available at a butcher’s shop.) Of course, no self-respecting farmer in Darking Hundred would fail to raise Dorking fowl—a large, meaty chicken thought to have been introduced to the area in Roman times. Poulterers from London flocked to Darking on market day to buy this tasty chicken, recognisable by its extra toe. Mrs Steer also keeps other fowl, which might include geese, ducks, turkeys, guinea fowl, and others. A farmer or hardworking cottager would also have a kitchen garden, growing cabbages, carrots, peas, potatoes, asparagus, and the like to eat in season; and many had at least a few fruit trees. Fruits and vegetables were always served cooked.

The step up on the social ladder represented by the Steer family also allowed for a third meal in the day—tea. Served in the evening, several hours after dinner after work was done for the day, it would have been a simple affair of bread-and-butter alongside the tea.

It was not only poor people who would eat parts of animals many look askance at today—pigs’ feet, tripe, organ meats, heads, and so on. James Woodforde, a clergyman who kept a diary of his daily life from 1758 to 1802, speaks of eating things like hashed calf’s head, stewed calf’s feet, and tongue for his dinner. Only the wealthy had stoves or ovens, so meats were roasted over an open fire or stewed or boiled in a pot. In addition to meats and poultry, clergymen, minor gentry, and aristocrats ate an astonishing array of wild birds: not just pigeon but larks, wheatears, swans, snipe, and more.

One popular way for people at many levels of society to sate a hungry belly and add nutrition to their diet was to make puddings. Today our definition of the term has narrowed, but in 1800 the word covered an enormous range of dishes. A basic dough or batter was made using flour, bread, or rice mixed with some kind of fat (suet, if it could be afforded, or drippings) and liquids, especially milk and eggs. This base was combined with ground cheap meats, bone marrow, blood, and so on to produce a savory pudding; or, for more prosperous people, sugar and dried fruits (‘plum’ pudding uses raisins) for a sweet.

The rich, of course, took meals to extremes. Breakfast, a light meal for most people, might include not just breads and pastries but also ham, bacon, and even beefsteak. The wealthy ate their dinners later in the day—five o’clock, or even later in London—so they might lay out a ‘nuncheon’ of cold meats, fruits, and cheeses around midday for family and visitors. Dinner was a long, ceremonious affair full of rituals that separated the clued-in from the ignorant. Meals were served in courses, called ‘removes’, each including multiple dishes to be sampled. But meals such as these mostly lie outside the scope of the stories in Darking Hundred, so I will avert my eyes from the excesses of the aristocracy and move on. In the evening the rich served tea with cakes and pastries, and a small supper of soothing hot concoctions was offered just before bedtime.

In a small town such as Darking, meals for the inhabitants tended to be a more scrambled affair. Shops were held open for long hours, often from seven in the morning till nightfall, and unless a shopkeeper had assistants he or she would have to nibble on something between customers. If shopkeepers were lucky, they might have a moment during the day when they might pop over to the bakery for a meat pasty, or pick up some oysters (in those days a cheap meal) from a fishmonger; but for the most part they could sit down to a meal only before or after the workday. I suspect it was the needs of town-dwellers that led to the evolution of mealtimes into the breakfast, lunch, and dinner we know today.

No survey of eating in Darking Hundred, however brief, would be complete without mention of water souchy. Tradition has it that in the seventeenth century, Dutch merchants would travel from London to Darking for a taste of this speciality, its name probably derived from the Dutch word waterzootje, introduced to England in the time of William of Orange’s reign. Frances Mountford offers a recipe in A Commoner’s Cottage: ‘Take 2 or 3 flounders and stew with parsley roots and leaves and 30 peppercorns in 1 quart of water. Stew until the fish falls to pieces. Pulp through a sieve. Set the fish and the liquor it was cooked in over a fire, and add some perch, tench, or flounder and some fresh roots and leaves of parsley. Simmer until done well enough and serve in a deep dish with some bread and butter.’ Other recipes add onion, vinegar, and other enhancements, and I popped in a few potatoes for the souchy served at the Gentlemen’s Darking Club so poor Harry Steer wouldn’t be too hungry.

He found the smell of the water souchy rather high, which brings me to something often overlooked in period stories: before refrigeration, much of the food people ate was spoiled or at least less than fresh. The very wealthy had ice houses on their property, but for most people, a cellar or a cool spot in the pantry was the best to be hoped for. Meats could be preserved in various ways to extend their viability, and fruits and vegetables could be pickled or cooked for use later. But keeping food safe to eat was very difficult: rodents and insects got into them, mould and mildew grew on them, milk went sour, stored foods froze in the winter, eggs became rancid, fruit rotted. Recipe books written for married women routinely included strategies for concealing spoilage: sprinkling fresh blood over putrid meat, adding spices to distract the nose from the smell, and so on. In partial compensation for the hazards of eating spoiled food, everything was cooked far longer than is considered necessary today, so meats were tough and vegetables pulpy.

People living on a farm had an advantage over the town-dweller when it came to access to fresh food, and the hazards for the urbanite didn’t end there. Food purveyors had no established safety standards, and it was common for them to boost their profits by adulterating their goods. Sellers of milk would dilute it with water—at a time when most water sources were contaminated with fecal matter, from livestock and humans. White flour was mixed with chalk and bone meal. For the horrors of tea, check out Part Three of this series, What People Drank! And lest you imagine that farmers always ate safe food, bear in mind that they dug out the family cesspit once or twice a year and spread its contents over the fields as fertiliser.

If modern stories about historical subjects were truly realistic, they would feature many more enteric disorders. 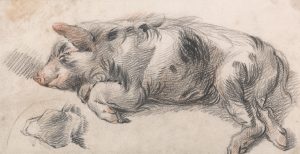