Let’s begin with the horrors of tea in 1800. Tea was a staple in every English household that could afford to light a fire, up and down the economic scale. In 1799, 25 million pounds of tea were sold in Britain, earning the government £1.5 million in import duties. (And that doesn’t take into account the tea that was smuggled in, estimated in 1783 as 11 million pounds of leaves.) Nearly all of that tea was of the green type and came from China—black tea did not become more popular till the 1850s. What the British people did not know was that the Chinese tea processors, believing that the British liked their tea to be a particular shade of green, doctored it with cyanide and gypsum! The quantities of these toxins consumed per cup were small, but at the rate tea was consumed by the British people, they accumulated in the body, leading to ‘fatigue, memory loss, headaches, irritability . . . dizziness . . . miscarriage in women, and failure to thrive in infants and children’ (Sarah Rose, For All the Tea in China, p. 91).

Why did the English drink so much tea, a product transported from half a world away at great risk and expence? Because water was rightly considered unsafe, and boiling it was believed to make it safe (though this may not be entirely true). Cattle were allowed to wade in streams and defecate there, and runoff from fields fertilised with human and animal waste flowed into rural water sources. The sewage from towns was channelled into the nearest waterway. Water from town pumps spread diseases such as cholera as well; only water from deep wells or springs might be relatively safe to drink.

I have not quite done with tea, though. Frances Mountford says, ‘Tea leaves were sometimes mixed with blackberry leaves to make them go further. The poor used their tea leaves time and time again and some bought used leaves from wealthy houses’ (A Commoner’s Cottage, p. 80). Trevor May, in Smugglers and Smuggling, adds, ‘Used tea leaves might be dried and cut with “smouch”, a mixture of ash leaves and sheep dung, and resold’.

Another, perhaps safer, way to make water potable was to make ‘small beer’. This was a home-brew that contained just enough alcohol (about 2 per cent) to kill the microbes in the water used to make it. Small beer was widely drunk at home at all hours of the day, especially by children. Farmers also often brewed their own regular beers and ales, cider, and porter—‘a strong dark brown bitter beer, brewed from malt which had been charred or browned’, according to Deirdre Le Faye in Jane Austen’s Country Life—as well as making mead, cider, and wines from hedgerow fruits such as blackberry and elderberry.
Drinking, of course, was not only done in the home. Inns, pubs, and alehouses served people of all classes; as they do today, they offered various beers, wine for their wealthier clients, and spirits for their poorer ones.

After 1780, when heavy taxes on malting barley and hops were increased, people who could not produce their own supply of these commodities started to give up home-brewing and began to drink in public houses more often.

Gin and rum were cheap drinks popular among the poor; gin was often distilled improperly and could lead to blindness or death, so it held all the allure of risk. Britain had its own domestic breweries and distilleries, but much of the hard liquor and nearly all of the wine had to be imported.

Import duties by 1800 were so extortionate that they made the price of alcohol a burden for many, with the result that much of what was sold came from smugglers. Smuggled spirits were transported in a concentrated form that could be toxic if drunk; upon reaching its destination the spirits were diluted and often treated with colorants to give them the desired appearance, with the result that both strength and quality varied widely. There were, of course, no standards.

Wealthier people drank very differently. They might start their day with tea, hot chocolate, or coffee; thereafter they drank mostly wine and some hard liquors in an astonishing variety of forms. Middle-class people drank cognac, armagnac, calvados, brandy, and spruce beer (a barley beer flavoured with pine needles) as well as cheaper wines. (Wine, by the way, was not purchased in bottles—that was illegal. People went to wine merchants with a jug and asked to have it filled from a barrel.)

The very rich drank a lot of wine, with claret (Bordeaux wine) being the most prestigious but appropriate only for men. Burgundy and Rhône wines were also highly regarded. And fortified wines (wines with neutral grape spirits added to stop fermentation) were widespread: Madeira, sherry, and port. Champagne was still rare in 1800, though the Prince of Wales drank it.

Cordials were popular for social occasions—ratafia, orgeat, negus, and punch among others. Ratafia used a base of distilled spirits into which aromatics were infused, often almonds or fruit pits, and the brew was then sweetened. Orgeat was a syrup made with sugar, orange flower water, and almond that was added to distilled spirits. Negus used a base of sherry or port, to which were added hot water, sugar, nutmeg, and lemon; it was considered an appropriate drink for men or women. It must have been very welcome to a woman wearing a thin muslin gown at a winter ball!

Punch recipes were legion, and makers of punch often had their own secret recipes. Captain Morris in Coldharbour Gentlemen makes a punch spiced with cinnamon and clove, which were used with a gin or even a cider base. Apparently he eschewed the punch named for his crony the Prince of Wales, which used extremely expensive ingredients including ‘China’ and Seville oranges, lemons, sugar syrup, rum, brandy, arrack, pineapple syrup, and green tea—which brings us back around to where we started on this bibulous journey. 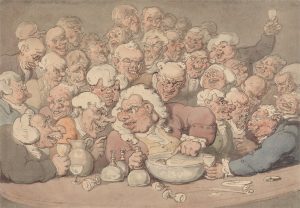 Trevor May, Smugglers and Smuggling (Oxford, 2014).

Frances Mountford, A Commoner’s Cottage: The Story of a Cottage through the Ages (Stroud, 1995).

Sarah Rose, For All the Tea in China: How England Stole the World’s Favorite Drink and Changed History (New York, 2010).