The Majesty of the People

Wars between nations are often alleged to result from clashing ideologies but they rarely do, and the wars waged between Britain and France from 1793 to 1815 are no exception.

I do not mean to say that ideology was not a factor driving the French Revolution itself. Ideas had been circulating in Europe for centuries that questioned the legitimacy of the social order, from the so-called ‘divine right of kings’ all the way down to a clergyman’s entitlement to claim a tithe of his parishioner’s produce. Ideals of human equality had been proposed by philosophers going back to Aristotle and the Old Testament, and these were refined and applied to politics in the sixteenth and seventeenth centuries.

The central idea that broke free from theoretical debate and became ‘weaponised’ in politics during the Age of Enlightenment was that of the rights of man—in the words of John Locke, ‘as all humans are created equally free, governments need the consent of the governed.’ This paired with earlier notions of natural law, the notion that there are universal principles governing human activity that exist independent of laws or governments—defined by Locke as ‘life, liberty, and property’ (note how ‘property’ evolved over the eighteenth century into ‘the pursuit of happiness’). These ideas are central not only to the United States’ Declaration of Independence but also to the French Revolution’s manifesto, the Declaration of the Rights of Man.

Such democratic ideals were as popular in England as elsewhere, embodied most eloquently in Thomas Paine’s Rights of Man (1792–93). But they were not universally accepted to the degree they are in free societies today: Paine’s work was a response to Edward Burke’s condemnation of liberté, égalité, fraternité in Reflections on the Revolution in France (1790). And conservative critiques grew in the face of the Revolution’s devolution into the Reign of Terror (1793–94). Fears were stoked that the labouring masses of the British countryside would suddenly appear at the gates of the manor houses bearing torches, that the guillotine would fall in the streets of London.

Despite the stray riot that erupted in England during the 1780s and 1790s, however, this fear was largely illusory. Although the average British workingman was fond of voicing resentment and defiance over a pint of home-brewed, there did not exist in most of Britain the extremes of desperation, starvation, and exploitation that drove the revolution in France. (Ireland was another matter and a subject for another day.)

Part of that was a matter of social structure. The French aristocracy were mostly absentee landlords, spending their time at court, and as a class were disdainful of involving themselves in matters of law enforcement and estate management. The ruling classes in Britain, by contrast, were magistrates and lords-lieutenant of their counties, and many were deeply involved in the lives and well-being of their tenants and servants. For all the hardships of rural poverty in England, feudalism had evolved into a kinder, more accountable form of local governance than prevailed in France.

So why was there so much stoking of fears of revolution in England during the 1790s? In part there was fear that France’s expansionist ambitions, especially as Napoleon Bonaparte rose to power, would lead to invasion. This concern had some level of legitimacy, though it seems that the French never seriously contemplated a massive, systematic invasion of Great Britain. To my way of thinking, the serious ambitions and the deepest fears lay elsewhere—at the farthest reaches of the globe.

It must never be forgotten that Britain’s enormous wealth in this era, which outstripped that of any other nation, derived from its colonies and its foreign trade. The systematic exploitation of more ‘backward’ parts of the world was the basis of Britain’s glory. This was the prize that Britain was desperate to defend, and it was the prize that France most yearned to capture—not the hearts and minds of the huddled masses yearning to be free. Most of the battles between France and Britain were fought not on European soil but on the open seas and in places like Egypt and the Caribbean. It was the shipping lanes and the essential ports-of-call that were in contention. The conflict was a true world war, dressed up as a war over rival systems of governance. And the ordinary men of both nations were the losers, as they died by the hundreds of thousands. 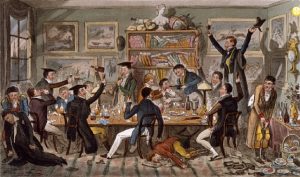 ‘The majesty of the people!’ was the rallying-cry of the French revolutionaries, touting the rule of the many and the defeat of kings. As mentioned in the post on the Duke of Norfolk, he took up that cry in 1798 at a birthday party for the Whig politician Charles James Fox—in his version, ‘Our Sovereign’s health: the majesty of the people!’ In the context of British politics, what did he mean to say?

I suspect his intent was somewhat muddled; the fact that he was drunk at the time makes this probable. In reality, the King of England owed far more of his power to the consent of the governed than any French king had to date, so in that sense he was closer to being a ‘majesty of the people’ than most European monarchs. And yet, the Duke and his audience on that occasion were all members of the opposition to the government in power, devoted in principle to constraining the powers of the monarchy and promoting a more representative government. They advocated policies intended to make their king more truly a ruler of the people than he was. And the Duke was using the revolutionary slogan of a violent overthrow of a king to express that wish, apparently embracing an anti-monarchist goal under the guise of celebrating the monarch’s health.

In reality I believe he was merely being snarky. King George III did not enjoy good health—he suffered from a disease later identified as porphyria that caused him to suffer extended periods of insanity—and if that insanity became permanent, the Duke’s crony the Prince of Wales would become Regent (as he ultimately did, in 1811). So by saluting the King’s health, the Duke was drawing attention to its precariousness. And pairing the King’s health with a slogan of revolution further undermined the honour.

Finally, in that moment the Duke may have been employing a tactic still popular among those disparaged for their outsider status or views: he embraced the slurs levelled against him, as feminists today embrace the label ‘nasty woman’ or gay people embrace ‘queer’. His toast was a deliberate provocation and a sophisticated, layered critique of the heated but ultimately empty rhetoric used to fight the ideological battles around the margins of the great war being fought between England and France over who was entitled to despoil the earth.

Edmund Burke, Reflections on the Revolution in France (1790).

Declaration of the Rights of Man and Citizen (1789).

Emma Vincent Macleod, ‘The Crisis of the French Revolution,’ in A Companion to Eighteenth-Century Britain, ed. H. T. Dickinson (Blackwell, 2002).