Who Hates a Friend?

Let’s face it, the Reformation opened a can of worms for Christianity. Once you start leaving doctrine up to the individual instead of entrusting it entirely to institutions, who knows what notions people will get into their heads?

In England, Protestantism has generally been a democratising force—making the Bible available to all who can read English, focusing on the individual conscience and a person’s direct relationship with the divine. But early on, the nation’s elite also made the fateful decision to replace the institution of the papacy with the institution of the monarchy, placing the king in the awkward position of authority over both secular and spiritual life.

This odd choice had long-lasting repercussions in the daily lives of the English. It began with

the seizure of valuable properties owned by the Church and their distribution to allies of the Crown, as well as to the Crown being entitled to appoint the elites of the new Church, both means of consolidating power and loyalty. More indirectly, it secured ongoing privileges for the clergy of the established Church ranging from seats in the House of Lords to mandatory tithes. Although such privileges are less in evidence today, in the first few centuries of the Church of England’s existence they played a more prominent rôle in the everyday lives of Englishmen.

The heavy thumb of the established Church inspired dissent, which led to the foundation of alternative sects, most of them more popular amongst the lower classes. Prominent among these was the Society of Friends, commonly known as the Quakers.

In the 1640s, a weaver’s son named George Fox was driven by inner turmoil to travel the

countryside seeking a truer understanding of God. He came from a Puritan village so his ideas were already at some remove from the orthodoxy of the Anglican Church, but in the course of his spiritual exploration (which he called ‘opening’) he developed a more radical theology—one that rejected ritual, ordination of priests, and the strictures of doctrine. It was Fox’s view that qualification for the ministry was granted not by men but by the Holy Spirit; that God’s presence was everywhere, not only in consecrated churches; and that tithes should not be paid to support a system of faith that had strayed far from God’s intentions.

Needless to say, this direct challenge to authority and its livelihood could not go unanswered. Fox and his adherents were repeatedly fined and imprisoned for their conscientious objections, labelled blasphemy. They responded by taking ever more radical positions, refusing to swear oaths (in a time when swearing loyalty to the government was a life-or-death matter) or to take up arms in the ongoing conflicts between royalists and parliamentarians. Over time, these trials refined the Society of Friends’s shared set of principles:

These inclinations towards radical equality and valorising individual convictions over institutions have led the Society of Friends into worldly trouble throughout the intervening centuries. From 1689 onwards they have been allowed to worship but for more than a century they were still restricted from many aspects of secular life; these restrictions were not lifted until 1828.

In 1800, the era of the Darking Hundred stories, being a Quaker still barred an individual from holding public office and subjected him to fines for the refusal to pay tithes. (It is notable, though, that in the Darking area there were Quakers who held positions such as Overseer of the Poor.) Because of the financial penalties many Quakers abandoned farming and entered professions that were not tithed, such as miller. The windmill on Holmwood Common that Harry Steer has to scale in Coldharbour Gentlemen was owned by successive generations of a Quaker family. Quakers also became bankers and industrialists and often flourished in their professions because of their devotion to principles of plain dealing, fairness, and honesty and their belief in living simply without unnecessary expence.

Because of their conviction that the individual’s relationship with God is paramount, Quaker families also placed a high value on education, ensuring that their children could read the Bible and other texts that improved their spiritual understanding. This made them unappealing candidates for personal service to many wealthy people, who preferred their servants to be illiterate (the whole radical-equality thing also doubtless played a rôle here too!). Nevertheless, their education would have qualified them for positions as clerks.

In 1800, members of the Society of Friends could still often be distinguished visually by their clothing, which was usually plain and behind the fashions of the day. Persecution by the state was a thing of the past but they were still targeted by bullies for insult and beatings on account of their appearance and manners. Their devotion to pacifism and humility, though, must have defused some of the hostility they faced, and their approach to commerce earned them respect. They stood apart to a greater degree than they do now, but were for the most part tolerated if not accepted. 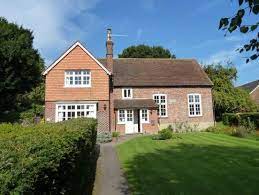 [The Quaker Meeting House at Capel, Surrey (built 1724). From heritage.quaker.org.uk.]

The Quakers: The History and Legacy of the Religious Society of Friends (Charles River Editors, 2020).