In today’s world full of supermarkets and international shipping, we take for granted diverse, well-balanced diets. In most modern industrial societies, even the poorest amongst us have access to an adequate and nourishing diet. But in rural England in 1800, the way we eat today would be an unimaginable luxury for most.

In Darking Hundred, a successful farmer like Harry Steer’s dad would be in the best position to eat well—at least after a year that saw favourable weather. He owned about five hundred acres of land with diverse soil types, so he could grow a range of crops—some for home use, some to sell at market—as well as keeping livestock that included cows, sheep, pigs, and poultry. Mrs Steer tended a kitchen garden as well as her poultry and dairy and she maintained a brewhouse and made cheese. A large farm of this type would produce the wherewithal to make bread, beer, and ale; eat vegetables in summer and legumes in their seasons; consume plenty of meat and eggs as well as the full range of dairy products; and, if the children helped with gleaning from the still-abundant common lands surrounding them, nuts and berry preserves as well as berry wines. The Steers’ cousins at Stumblehole maintained an orchard so they could add fruits in season and make more preserves. Cash from the sale of their crops allowed Mrs Steer to buy tea, sugar, and other imported foods.

Such plenty as the Steers enjoyed depended on hard labour and the hazards of the weather, and even under ideal conditions it was unusual. Some farmers could grow only a limited range of crops because of the quality of their soils, so their enterprises were not self-sustaining and depended on the fluctuating prices they could get at market. Other lands could support only pasture, so mutton became the centrepiece of their diet. And these are still the people fortunate enough to control land.

Cottagers who worked for others saw their food supply wax and wane with their seasonal incomes. They might earn enough to buy flour and cheese and a version of tea (usually cheap stuff adulterated with dried hedgerow leaves and even dung, for colour). If their leases allowed

them access to common lands, they could glean nuts and berries, cut sticks for firewood, fish, kill birds (but not with a gun), and sometimes poach rabbits and hares, which were ordinarily the privilege of the landowner—though such crimes were subject to draconian penalties if they were caught. They would trade eggs, dairy products, and scarce meats amongst their neighbours—one might have a cow, another a few chickens, another a pig, though few would be so fortunate as to have all of these. The people in this group often found themselves in need of support from the parish, which was available but often only sufficient to support a starvation diet—cheap bread, porridge, a little ale.

Shopkeepers and tradesmen were dependent for their food on the success of their businesses, of course. The years around 1800 may have been especially trying for them because the cost of many goods was inflated thanks to the war. Imports were disrupted by conflict at sea, the government was raising operating funds by imposing steep import duties even on necessities, and much of what the nation produced domestically was syphoned off to support the war effort. So a shopkeeper would have to pay an inflated price for the goods he stocked, at a time when failed harvests and economic disruptions were reducing his customers’ ability to pay. No wonder the smuggling fraternity found so much support!

Few tradesmen—makers of candles, repairers of carriages and carts, blacksmiths and all the rest—remained entirely untouched by the distortions in the economy. Either the iron they needed was requisitioned by the army or wood was scarce because of the boom in building warships or the cloth and other products previously spun and woven at home were being produced more cheaply by factories in the north. There was very little about their jobs they could take for granted.

Floating above these rough seas were the fortunate—bankers and solicitors and estate managers, with good salaries, and of course the landed gentry and aristocracy, whose income was derived from rents paid by their tenants. The landed gentry had access to high-quality foods denied to most of the populace: exotic fruits and vegetables, from pineapples to tomatoes, grown in their hothouses; game birds and other animals on their property that only they were allowed to hunt; and all the refined domestic and imported foods and drink they were able to buy.

The clergy were a special case. Their income was derived from complex sources including the amount of property associated with their parsonage (glebe lands) and the number and prosperity of their parishioners, who owed them tithes. Tithes were often paid by farmers in kind, not in coin, so a clergyman might find himself in bread and eggs and gardenstuffs depending on what was produced locally. Members of the clergy were most commonly the younger sons of gentry families, so they might have additional property or income to supplement their ecclesiastical income, and they might receive gifts of produce, meat, and game from their relations.

Today we think of our food options as based on the money we have, but in Darking Hundred in 1800, that was the case for only a narrow slice of the population. Most people grew or gathered or made their own at home. 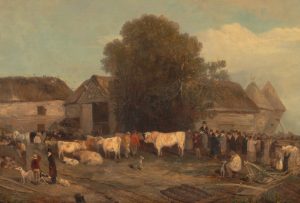