The turn of the nineteenth century was a period of suffering, turmoil, and rapid change in England. The stability of the rural economy was eroding, industrialisation in the north was wiping out home-based industries across the land, and the relationships between the haves and the have-nots were shifting. Years of war acted as an accelerant to change and created new economic pressures. The poor may be always with us, but in 1800 they were more numerous and more desperate than ever.

My focus is on an often-overlooked group, the rural poor. Those living in poverty in towns and cities have been much studied, but their lives were very different from those who remained in the countryside. In 1800 about one-third of England’s population worked in agriculture, and that doesn’t count all the craftsmen whose livelihoods depended on their service to the agricultural sector—the millers, the builders of ploughs, the grain middlemen, and so on.

As recently as the eighteenth century, working in agriculture offered a relatively safe life, if not a lavish one. Among other benefits, support for the poor was organised by the parish, so remaining in one’s home place gave access to services not available in urban areas. Young, unmarried farm workers would live in the household of a farmer who owned his own land (or leased it from generation to generation), earning a small income but provided with room and board. If these farm labourers saved, they could eventually rent their own farmhouse and a few acres—a chancier business than living with one’s employer but one offering opportunity. If they had any livestock, they were usually able to graze their animals on common lands, where they also often had other rights such as gathering fuel (estovers, turbary), fishing (pescary), and others. On the other hand, they had to pay rent and secure their own food and clothing, and they earned money only irregularly, at piecework rates—plenty during the harvest, but nothing for most of the winter unless they made goods to sell from home.

For a safety net there was poor relief, workhouses, and almshouses. Poor Rates were levied against all parishioners judged to have the ability to pay; the funds were administered by churchwardens and overseers of the poor, who determined who was in need; and they were distributed by the executor of the poor fund. In 1799 in Darking, the churchwardens were local businessmen John Stedman and James Rudge; overseers were George Eives, Robert Niblett, Thomas Philps, and Thomas Moore; and the executor was John Attlee, the ambitious shopkeeper who sold supplies to farmers and dealt in grain.

The workhouse in Darking was for housing the homeless poor who were able to work. Residents were given basic clothing; money not exceeding two shillings a week; and simple food

including gruel and bread for breakfast, cheap meats or suet pudding and ‘garden stuff’ for dinner, accompanied by a pint of small (weak) beer, and bread and cheese for supper. They could be hired out in the community or work at the workhouse weaving blankets. Indigent people who could not work were housed in the almshouses, located close to Cotmandene on the east side of the town.

In addition to the poor people living in these accommodations, the overseers were responsible for supplementing the incomes of people who had their own homes, in town or the surrounding countryside, but who lacked sufficient means to feed their families. They also helped orphans, illegitimate children, and the insane, and were responsible for inoculating the poor against smallpox. In Coldharbour Gentlemen, Mollie Fish the street vendor would have been given one shilling and sixpence per week for each of her three bastard children—a significant supplement to her income.

At the start of the 1790s, an estimated 40 percent of the poor needed some poor relief some of the time, their income falling below the estimates for subsistence expenditure. By the end of the decade that number had grown substantially, putting enormous pressure on the landowners and shopkeepers who paid the Poor Rates. Poor relief in 1803 reached £4 million nationwide, double what it had been only a decade earlier.

Meanwhile, trends in the 1790s were not in the poor labourer’s favour. There were several years of terrible weather, which led to scanty or failed harvests. More common lands were being enclosed (though not in the Darking area), cutting off poor people’s access to spaces where they could pasture a cow or pig, glean berries and nuts, fish, and gather fuel. And the prices of goods inflated rapidly as the war went on, with the military syphoning off food staples and other supplies, leading to regional shortages.

The farmers who hired the labouring poor also contributed to their distress. Those, like Harry Steer’s family in Coldharbour Gentlemen, who had enough assets to profit from the higher prices began to live more like gentlemen. Gone were the unmarried young men living in their house; they preferred to hire labourers who lived elsewhere. In Harry’s household, only Nat the stableboy and Janey the kitchenmaid live at Henfold, and it is notable that they don’t eat at the same table as the family. Mr Steer hires all his labour for the sheep shearing, haying, and harvest. All those men would be seasonal workers, paid a pittance and having to support a household on it.

In 1795, the passage of the Speenhamland Act made everything worse. It established a scale for levying Poor Rates based on the price of bread and determined what a poor man would receive depending on the size of his family. This created an incentive for farmers to hire only the indigent, so they could pay them less than a living wage and rely on the parish to make up the difference.

Supporting the poor had been traditionally seen as a moral obligation, with adequate relief considered a right a poor person could demand. In the cities, wage labour was already eroding this connection between rich and poor, and the many pressures of the 1790s were beginning to fray the bonds between landholder and labour in rural areas as well. In the past a hungry person could turn up at the kitchen doors of the gentry and ask for food, or drink beer from a keg set by the door; but the successful London businessmen who were increasingly buying up grand houses and estates around Darking had not grown up with the traditions ofnoblesse oblige and often ignored them. Lifeways practised since the Middle Ages were gradually disappearing, and some of the effects may be seen in Coldharbour Gentlemen. Over the next century, they would disappear altogether. 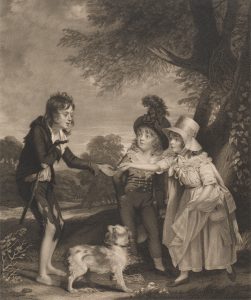