To strive with difficulties, and to conquer them, is the highest human felicity.

Milord and the Captain

Readers may be surprised to learn that the smuggling kingpin of Coldharbour Gentlemen, John Tilt, is not an invented character. He lived and his will is extant, along with a few secondhand recollections of his activities. His descendents, especially Pam Palmer, have made a study of his life and history, which they were kind enough to share with me and which form the basis for my story.

Born in 1743, John Tilt was an illiterate yeoman farmer from Newdigate; he moved into Capel parish about 1770. In his younger days he is said to have pursued the calling of highwayman—apparently with some success, because by the age of forty he had begun buying and leasing properties around Newdigate, Capel, and Darking. That his ambitions had already expanded into smuggling is implied by the locations of the properties that interested him, all of which were most conveniently adjacent to local smuggling routes. Between 1784 and his death in 1811, his name was associated with at least ten properties, several of which are named in Coldharbour Gentlemen—Redlands Farm, Harlands, Heathfields, Anstie Farm, and the three attached cottages in Coldharbour village (see below).

His wife, Ann Peters, came to the marriage with an illegitimate son, whom John Tilt accepted into his household and to whom he ultimately left £300. The couple went on to have ten children; a few of them died young but most lived to have children of their own. In addition to still owning four properties at the time of his death (some freehold, some copyhold), Tilt was able to leave bequests totalling £4,350—an extraordinary sum for an illiterate farmer to have in his savings.

With this level of wealth to bestow at the end of his life, it is hard not to conclude that Mr Tilt was a better smuggler than he was a farmer. Indeed, the names of several tenants on his properties are also associated with local smuggling tales, which implies that he took care to provide homes for his ablest employees, creating a mutually beneficial network of favours given and received. From these hints I have constructed Milord, a smuggling entrepreneur and organisational genius who acted like an underworld lord of the manor.

John Tilt’s wife Ann died in 1801, so I have chosen to portray her as an invalid in 1800. With no supporting evidence I imagined her as having suffered a paralytic stroke and unable to speak or move, but still cherished within her family circle. 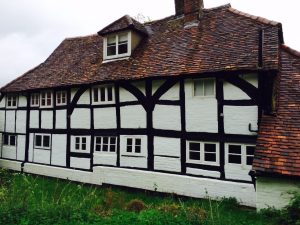 In placing Mr Tilt and his extended family at Redlands Farm, I have taken some creative licence. Although he is known to have occupied Redlands around 1784, he had probably quitted it long before 1800, the date of the Coldharbour Gentlemen story. When he signed his will with an X in 1802 he was living in Capel on a property called Meeting House (possibly a former Quaker meetinghouse, as the Society of Friends had many adherents in the area). At the time of his death in 1811, he is listed as occupying both Anstie Farm (not far from Coldharbour and part of the Bury Hill estate) and White House Farm (more colourfully known as Folly Farm), near the turnpike road on the way to Darking. It was inconvenient for me to situate the Tilt family in Capel, however, because if they had lived there Harry and his family would have encountered them weekly in church, which must have been awkward for my young hero!

Regarding Harlands, the small farmhouse beyond Newdigate where the smugglers of my tale hide their most terrifying cargo, Tilt owned it from 1788 until 1796 (so it would not have been available to him at the time of the story). In 1796 he also made a loan of £200, at 5 per cent interest, to the churchwardens and overseers of the poor in Newdigate, enabling them to buy the house that became the poorhouse there; Harry walks past it on his way to Harlands. I jumped the gun a bit on making it the poorhouse where the indigent were set to weaving: that scheme began in 1801 when the parish contracted with a John Rooles as Workhouse Master. He instituted a manufactory producing a cheap cloth known as Newdigate Frizzle.

The farm called Heathfields, where I have stabled the horses for the smuggling runs, is one of the properties Mr Tilt still owned at the time of his death. He left it to his son William. It was just across the way from the Bottle and Glass, a tavern known to be frequented by smugglers, on the road now known at Blackbrook Road but earlier called Brimstone Lane.

As for Tilt’s son James, nicknamed the Captain in Coldharbour Gentlemen, he would likely not have been still living with his father in the summer of 1800. James married in 1798, and in April 1800 his father took over the copyhold of Betchets Green Cottage in the Holmwood (from a farmer who had lost everything after the disastrous harvest of 1799) and installed James and his wife there. Their first child was born in August 1800, but I have chosen not to dwell on James’s possible feelings as a new parent, diverting those sentiments instead into an affection for the enterprising Harry Steer. By the time their sixth child, Elizabeth, was born in 1813, James Tilt is described as a ‘labourer’, so we may gather that the smuggling enterprise was no longer a going concern. Most of John Tilt’s children in fact were engaged in humble professions, ranging from farmer to wheelwright to baker; only one son rose high enough to become a schoolmaster.

Another Elizabeth Tilt—probably the daughter born in 1803 to John Tilt’s son Thomas—has a little history with Harry Steer’s onetime home, where she was hired about 1820 as a servant and later gave birth to twins sired by her employer (see the post about Henfold house). In general, John Tilt’s children and grandchildren seem not to have inherited his enterprising nature, which only highlights what an extraordinary man he must have been. In Coldharbour Gentlemen I have tried to honour his gifts, however misapplied they might seem to be.

Kathy Atherton, The Lost Villages: A History of the Holmwoods (MPG Books, 2008).

Frances Mountford, A Commoner’s Cottage: The Story of a Cottage through the Ages (about Betchets Green Cottage; Alan Sutton, 1995).