To strive with difficulties, and to conquer them, is the highest human felicity.

The Walking Dunghill, Part the Second: in which the inner man is explored, and the reason for his sobriquet revealed

Why was Major Peter Labilliere so remarkably filthy as to be labelled, in an age not noted for high standards of hygiene, the Walking Dunghill? In his spiritual life he was preoccupied with ideas of purity and order. Why then did he not match the external person to the internal quest?

I believe he made his flesh a mortification for two reasons: to practice humility and as a test of others’ righteousness. On the one hand, his writings reveal a mind in a continual struggle to find calm and discipline—the beauty of order. He sought, in his own words, ‘a prudence and perfect tranquility in all conditions; and in short, a continual victory over self-love and our passions’ (Christian Political Bee-Hive, 1794). On the other hand, he appears to have been in the habit of observing the reactions of others to his person as a means of probing their high-mindedness. In 1784 he wrote that he ‘acquired knowledge of mankind by finding that low circumstances and a dirty shabby appearance, is an excellent mouse-trap, to catch the distorted eyes of pretended friends.’ In his poem ‘The Spiritual King: or, Self Government,’ he advised the powerful to

‘Wear self-abasement for thy common Dress;
Thy Royal Robes are Jesus’ Righteousness.’

Abandonment of the externals of status through the wearing of plain garments was a common strategy for those inclined to a rebellious form of spirituality, adopted by the Quakers and many others; it is perhaps typical of Major Labilliere that he took the impulse to extremes.

That proclivity for taking absolute measures may be seen in his spiritual discipline as well. ‘Happy is the man’, said he, ‘who retains nothing in his mind but what is necessary, and who only thinks of each thing just when it is the time to think of it; so that it is rather God who excites the perception.’ In the Christian Political Bee-Hive he quotes Psalm 16:8, ‘I have set the Lord always before me,’ and says his aim is ‘a familiarity with God so great, that no two friends upon earth converse oftener together, nor with greater endearment, freedom, ease and openness of heart.’ This degree of devotion ‘will give you a more just claim to the Character of Christians, than the most zealous professions of particular Systems of Faith, or the most exact observances of external Rites, and forms of Religion.’ We can contemplate him resting upon his favourite spot on Box Hill in the enjoyment of intimate intercourse with his Maker; and we can understand why he felt no hesitation in calling for a funeral service that bore no relation to the traditional forms of such events.

This intensely personal relationship with God, however, was something he understood paradoxically as a public act, through which he sought to create ‘God’s moral government’ on earth. ‘The Doctrine of Christianity,’ he said, ‘is most adverse to all Tyranny and Oppression, but highly favourable to the Interests of Good Government among Men.’ In enormous capital letters in the Christian Political Bee-Hive he proclaims,

‘“Glory to God in the highest, on earth peace, good-will towards men!”—
United with the Natural Rights of Mankind, contains the Epitome of all the
Religious, Moral, and Political Truths in the Universe; and comprehends the
only efficacious Laws by which Mankind should be Governed!’

From his spiritual foundation rose all his ideas about the mandate to relieve the distresses of the poor, about equal representation, about opposition to the wars against the American colonies and France, and the other elements of what he called his ‘Christian political warfare’.

He was fond of quoting the tenet of the Greek philosopher Diogenes that ‘Virtue is not rest, but Action.’ Major Labilliere, in fact, regarded himself as a modern-day Diogenes, choosing poverty as a means of challenging the values and institutions of a debased society. So the degradation of his appearance was as much a provocation as it was a mortification of the flesh.

But his devotional way of life may be perceived in a more poignant light. It is clear that the Massacre at St George’s Fields, to which he may have been an eyewitness, was a traumatising event that profoundly altered his mental and emotional landscape. From that day forward he made repeated allusions to himself as a Prodigal, by which term he appears to have intended to convey his turn from temporal to spiritual preoccupations. These preoccupations focused to a striking degree on the idea of order, as expounded in Dr Blair’s sermons: ‘The man of Order is . . . the Follower of God, he walks with him, and acts upon his plan. . . . The Kingdom of Satan is the reign of disorder and darkness. To restore order among the works of God, was the end for which the Son of God descended to the Earth.’ The Major’s path was also one of suppression, a struggle against what he termed the ‘Irregular Passions’. Throughout his writings the Kingdom of God is associated with ideas of calm and tranquillity; it is a place of sanctuary from chaos.

Many observers reported of Major Labilliere that he was ‘mad’, ‘eccentric’, one who had ‘half lost his wits’. His appears to have been a troubled mind, turbulent with storms of emotion and chaotic thoughts. He seems to have felt a constant yearning, never quite satisfied, for the ‘Presence of God’ which ‘gives sweet repose and quiet’. Nevertheless, he was remembered as a kind and gentle soul, loving to children and strangers, who would eat no flesh, childlike in his demeanour and striving always to follow the Rule of doing unto others as he would have them do unto himself. E. W. Brayley, in his Topographical History of Surrey, remarks, ‘His eccentricities were harmless, and himself the only sufferer.’ He sought always to embody the temper of the God he knew as the ‘Prince of Peace and of Patriots’: ‘humble, meek, peaceable, heroic, benevolent, friendly, forgiving, and pious’. Whatever his inward struggles may have been, it may be said to his credit that he never yielded to the demons that beset him. We may hope what is asserted in Matthew 5:8 is true of the Walking Dunghill: ‘Blessed are the pure in heart, for they will see God.’ 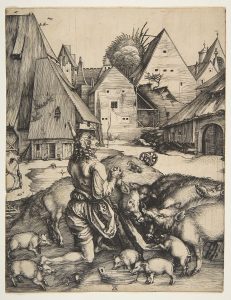 Peter Labilliere, Christian Political Bee-Hive, Containing an Assemblage of First Principles, Manifestly Calculated to Promote Universal Amity and Good Government, and to secure Real and Permanent Felicity to Every Individual who hath any regard for Truth and Liberty or Pure Christianity (London, 1794).